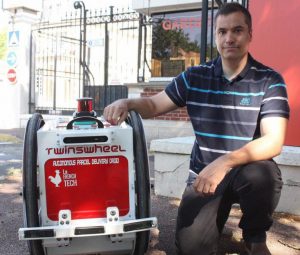 TwinswHeel is a smart, flexible and efficient droid for all year round delivery 24/7

“We design and manufacture the droids that will contribute to the future of urban logistic,” said co-developer Vincent Talon. “The first step is to focus on enclosed sites such as large industrial sites and shortly after cities with e-commerce and convenience stores.

“Our droid is based on autonomous vehicles in order to succeed in a self-sufficient goods delivery business. TwinswHeel is a smart, flexible and efficient droid for all year round delivery 24/7.”

TwinswHeel was created before Piaggio Fast Forward’s Gita personal cargo droid – but is remarkably similar! It was first launched in France in August 2016 and presented at the CES show in January this year. 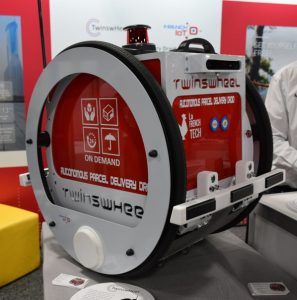 TwinswHeel is is a small self-driving droid designed for ‘last mile delivery’ and can carry up to 40 kilos. It is currently able to function in collaborative mode by following an operator or by moving alone in a enclosed and well-known site. Its design gives it a very high level of agility and it is able to climb curbs.

Equipped with a lidar (the rotating beacon mounted on its top) and a 3D camera, TwinswHeel has a cruising speed of 7km per hour and a range of 10 kilometers.

TwinswHeel’s partners include the French postal delivery service La Poste, so it clear where its applications will be in the future.