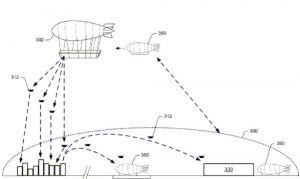 The warehouses, referred to as ‘airborne fulfilment centres’ (AFCs), would be carried by airships stationed above cities, and used to store items and then deliver them using drones, otherwise described as ‘unmanned aerial vehicles’ or UAVs.

The patent details that the drones dispatched from AFCs would glide to their destination, rather than fly – therefore using no power. The drones themselves are able to cruise and hover at altitudes of up to 14,000 metres (45,000 feet).

The plan seems to 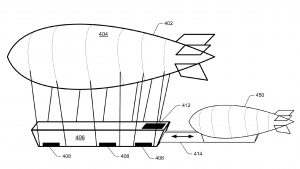 be that the warehouses would visit places where Amazon expects high demand for certain goods. For example near major sporting events or festivals where they would distribute food or souvenirs to spectators.

Earlier this month Amazon made its first commercial delivery by drone via a test-programme it is running in Cambridge, UK – so the concept of flying warehouses simply takes the whole concept of drone delivery to a literal new level.

Previous Post The future of food retailing and delivery in the 4th industrial age Next Post Could driverless cars cut delays?