Enter the real RoboCop, or maybe more like RoboPenguin! 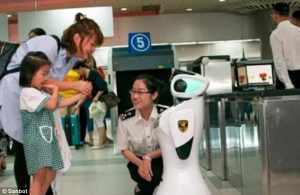 Passengers making their way through customs at Chinese airports could soon be greeted by a fleet of small information providing, crime-fighting robots. Sanbot has been trialled in China’s Gongbei Customs, a port on mainland China’s border Macau.

Designed and built by Shenzhen-based Qihan, Sanbot can speak 28 languages and is designed to interact with people in a range of environments. According to Qihan, in the trial, the robots were trained to recognise know criminals, using facial-recognition software, helping to make customs inspections ‘faster and safer’. 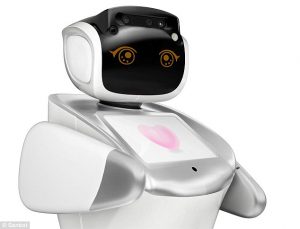 According to TechCrunch, at Sanbot’s heart is a Microsoft Kinect-style movement tracking system and high definition camera, with a number of LEDs for facial features and even an HD projector in its head. A touchscreen tablet computer is embedded in its chest along with speakers and a subwoofer.

Of course, crime-fighting isn’t Sanbot’s prime concern, as the flipper-armed little robot’s target roles include sales assistant, restaurant waiter teacher, security guard, entertainment machine and monitoring home appliances, with users controlling the robot through an Android or iOS app or through the cloud.