Droid lanes? Where will robots roam? 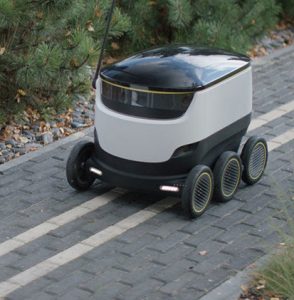 In most towns and cities we see bus lanes, designed to speed public transport. They mostly do just that, but they also take away a lane from other road users, making them think, perhaps, about swapping to taking the bus.

Cycle lanes are there too and their purpose is primarily to allow cyclists to ride safely.

And cyclists are not allowed to ride on the pavement, forcing them, where no dedicated lane exists, to use bus lanes – along with taxis and often motorcycles – or the rest of the road with cars, vans and lorries.

So what about delivery robots such as Starship Technologies’ cute 6-wheeler? All the trials in the UK, US, Germany and the Netherlands see these autonomous vehicles using the pavement to get from A to B. In the US, Idaho and Virginia have legalised the use of robots from this summer, but have they thought about how many there will be on the sidewalk in say two years from now?

As planning and effective infrastructure change takes time, forward thinking town and city councils must begin to consider where autonomous delivery robots operate. Walk any city street at a rush hour and wonder about it. A robot here and there is one thing, dozens crowding the pavements and causing droid-jams is something else. 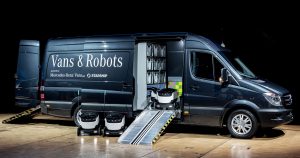 The beauty of the concept of autonomous delivery robots is to cut the cost of ‘last mile delivery’, while reducing the numbers of traditional delivery vehicles [vans] on our streets. In busy cities, delivery vans are already restricted in when they can deliver and where they can stop. The Robovan concept goes a long way to solving this issue, but how many robots will be on our streets – or actually, on our pavements – if the idea really takes off? 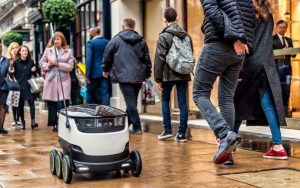 So I’m just thinking out loud about the real impact these technologies will have when they become commonplace. And I’ll leave for another day wondering about how legislation will be used to manage an overload of delivery drones above our heads.

Previous Post Is it a drone? Is it a droid? Meet Panther – it flies and drives! Next Post Drone legislation… whose sky is it anyway?