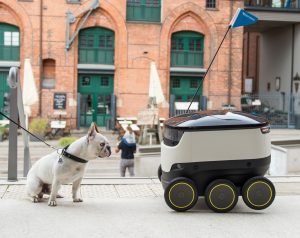 Hermes CEO Carole Woodhead said: “Starship Technologies is a highly innovative and pioneering firm. We are extremely pleased to utilise their expertise to explore exciting new ways that will further strengthen our portfolio of services and offer greater choice and convenience for customers.

“We can already see first-hand the success they’ve had with food deliveries in London, and we are excited to team up with them in a bid to revolutionise the home delivery marketplace.”

Drones or robots? Every time I think about it, I come down on the side of bots – because they are so much less likely to fall on your head!

The trial sees Hermes customers booking a robot to arrive within a half-hour window to collect their package and deliver it to a nearby destination. The parcel (up to 10kg) is securely contained in a compartment in the robot that can only be unlocked using a code sent via a smartphone app.

Hermes hopes that robots offer a practical alternative to drones, and may be particularly useful in cities with tight airspace restrictions or where delivery drones are not allowed.

As both drones and bots become more commonplace and as pavements and skies become more crowded, legislation will begin to dictate restrictions in their usage. Drones or robots? Which will win the battle to reduce the cost of ‘last mile delivery? Every time I think about it, I come down on the side of bots – because they are so much less likely to fall on your head!