Flying Squad: eye in the sky for UK police

In the UK, Devon and Cornwall Police has been advertising for a ‘drone manager’ to head up its new dedicated 24-hour drone surveillance team, due to be launched this summer across its two counties, plus Dorset.

In an interview with the Daily Mail, national Police spokesman on drones, Assistant Chief Constable Steve Barry said: “There may be an opportunity at some point in the future to rationalise what we need our cops to do because we find drones can do it more effectively and more cost-efficiently … an example of that would be looking for missing people.

“If delivering the best service within the budget means using drones for something, a cop is now free to go to that burglary.” 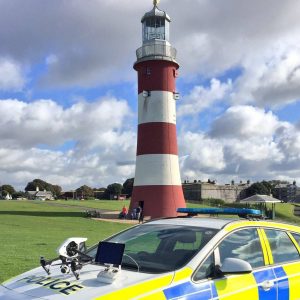 UAVs are being tested by 21 different UK police forces with roles ranging from photographing and videoing crime scenes, to everyday search missions and monitoring large gatherings or football matches.

An average Police helicopter flight can cost as much as £1,200, so utilising drones is clearly a cost-saving option.

Talking to the Daily Mail, Chief Superintendent Jim Nye, strategic alliance commander for operations in Devon, Cornwall and Dorset, said that drones would be a ‘significant piece of kit’, which would provide ‘an opportunity to improve technology available to police to better do what we do’.

Previous Post Meet Pouncer, the edible drone Next Post Real-life RoboCop 2: Dubai to have android police force in May