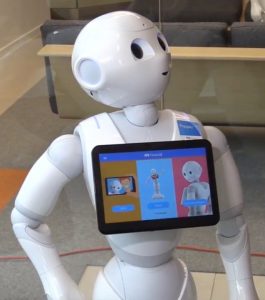 In Canada, ATB Financial has a new addition to its customer service team, a humanoid robot named ‘Pepper’ who will be used “to help enhance the customer experience”.

ATB is the first North American financial institution to introduce the robot which can interact with customers, answer questions, and even dance.

“Bringing on Pepper to assist our customers will help us learn what is possible,” said ATB President and CEO, Dave Mowat. “Pepper is cutting-edge technology. We’re excited for her to say hello to our customers and tell them about ATB — or just dance together for a bit.”

The robot will be introduced in May to ATB’s Chinook Centre location in Calgary and move to other locations over the summer. It will also be featured at the Calgary Stampede.

“Pepper is not designed to take away any jobs. In fact, she’s best used to do repetitive, mundane tasks that humans may not want to do.”

“If Pepper proves popular, ATB will continue to advance the robot’s skills to create a new type of digitally enhanced banking experience, one that uses data in intelligent and helpful ways and in unexpected locations.” 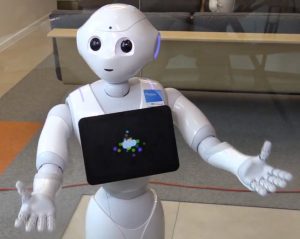 “We found out that there’s some people who don’t really love banking, and don’t love coming into banks,” said Sandi Boga, ATB’s senior manager of innovation. “We want to bring happiness to people using banking.”

The robot is meant to free up staff so they can engage on a more personal level with customers, said Bill Lott, global project manager with SBRA. “Pepper is not designed to take away any jobs. In fact, she’s best used to do repetitive, mundane tasks that humans may not want to do.”

‘Pepper’ is manufactured by SoftBank Robotics and has already been used in banks in Tokyo, Dubai and Taiwan. It has also been used in hospitals in Belgium and by Nestlé in Japan to sell Nespresso machines…

‘Pepper’ may become more commonplace than you think… and its cute too!

Previous Post Meet Lilium, the VTOL taxi! Next Post You wait for one flying taxi, then two come along at once